Don't allow Texaco to Use Our Children 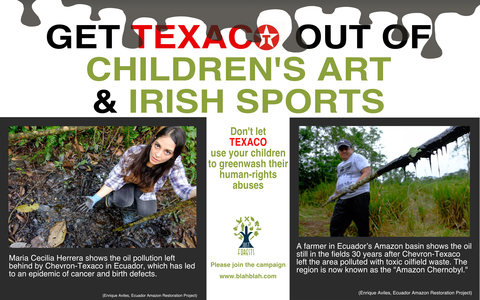 I demand that Texaco (H2 Group and Valero/Texaco) get out of Children’ Art and Irish Sport immediately.

Courts in Ecuador found that Chevron-Texaco had deliberately dumped 16 billion gallons of cancer-causing toxic oil waste into the rainforest, causing a cancer epidemic that has killed thousands and has decimated five indigenous nations who are teetering on the brink of extinction.

They inflicted death and devastation on communities of people and wildlife that no fair-minded Irish person would ever tolerate.

“The oil companies came to these pristine forests, backed by our own government. They took what they wanted and wiped-out cultures, completely disregarded the Indigenous people, killed animals and ruined sacred places. In the end, the people couldn’t do anything about it because they couldn’t speak the language of the people destroying their lives!
The same destruction is still going on to this day.” Nina Gualinga, Indigenous campaigner for Ecuador Amazon Watch. Nina Gualinga, an indigenous environmental and human rights warrior from Ecuador. https://amazonwatch.org/news/2016/0715-toxic-tour

Then, they fled Ecuador after a court had ordered them to pay $US9.5 billion in compensation to local communities. Ever since, they have threatened the communities they violated with a ‘lifetime of litigation’ unless they dropped the case. They have attacked their victims with retaliatory lawsuits.

In the face of their inexcusable and catastrophic impact on the planet, fossil fuel companies like Chevron-Texaco are desperate for a ‘social-licence’ to operate. In parallel with their human-rights abuses in the Ecuadorian Amazon, Texaco were cynically running a ‘Children’s Art Competition’ here in Ireland while at the same time they were destroying children’s lives in the Amazon. The legacy of that destruction continues to this day.