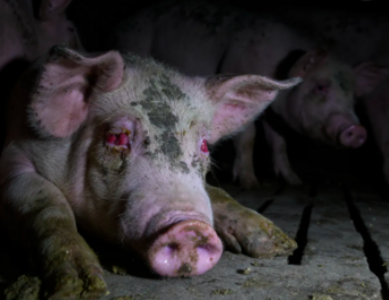 Intensive farms like the one currently planned for would mean up to 40,000 pigs would be confined indoors in overcrowded, barren concrete pens. The animals are often treated with antibiotics to keep them alive in such horrendous conditions, and their waste contains ammonia which causes respiratory problems in humans and pollutes sensitive natural habitats.

According to the Bureau for Investigative Journalism, Co Tyrone has the fifth highest number of indoor reared livestock in the UK, with Co Antrim placed at eighth. The two counties have a combined total of 13.5 million animals reared indoors.