To: Ghana Consulate in Ireland 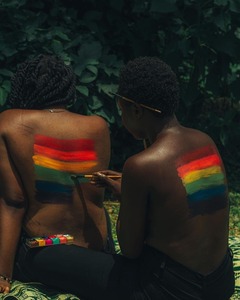 Condemn the "Promotion of Proper Human Sexual Rights and Ghanaian Family Values Bill, 2021". It undermines family values, is homophobic, transphobic and endangers marginalised people, the family and society as a whole.

Whatever way this goes, other countries will be influenced.

Because Human Rights are for ALL.
This Bill gives fuel to homophobia and transphobia and misguided ideas about Ghanaian history and culture.

It:
Puts non-consensual and consensual acts on the same footing;
Criminalises transgender people;
Specifically allows for the promotion and spread of anti-lgbti+ propaganda.
Will pressure families into genital mutilation of their intersex children;
Gives lighter sentences to those who attack lgbti+ people than to those believed to be involved in a consensual homosexual act.
Pressures conformity to gender stereotypes for fear of criminal prosecution.
Bans and criminalises "Allyship".
Bans supporting lgbti+ charities. Many people rely on these for food, moral support and safety.

Pushing people underground leaves them even more vulnerable and less likely to receive help when a victim of crime.
Is based on misplaced fears of "lgbti+ agenda", of "Western influence", of "turning people gay", "undermining the family" and misinformed ideas of "culture" and "values". People of all gender, sex and orientation minorities have always existed and been part of the fabric of every country and ethnicity.
Anti-gay laws were in fact introduced by the colonisers: something which the UK now regrets and realises was wrong.
Innocent people would be criminalised for being who they are. Many non-Lgbti+ people would be criminalised too for gender nonconformity, supporting family and friends or simply based on false accusation. Therefore it is dangerous to all in Ghana and warrants condemnation even by homophobic and transphobic people and those hesitant about gay rights.
This Bill has been described as among the most homophobic ever written. The rest of Africa and much of the world are watching and many will be influenced by whichever way this Bill goes.
Lives are in danger. It must be stopped urgently!

One critical point is that if this bill passed, it would be ILLEGAL to campaign to repeal it!
Photo credit: @lgbtrightsghana Instagram page. Used with permission.