To: Charlie McConalogue Minister for Agriculture, Food and the Marine 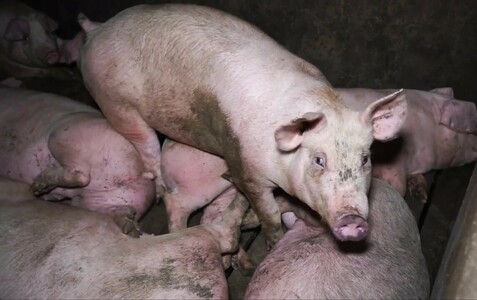 It's time to enforce the EC Pig Directive on the docking of tails, clipping of teeth, stocking densities and provision of optimal enrichment. An EU audit conducted in 2020 found that nearly all commercial herds in Ireland rear pigs with docked tails contrary to the requirements of Directive 2008/120/EC and there is strong evidence of overstocking on pig farms. It's also time the Minister took action to ensure that all pigs are afforded the five freedoms as a bare minimum, as set out in the Animal Welfare Strategy launched at the start of the year, which means an end to barren pens and farrowing crates that deny pigs and sows the ability to carry out any natural behaviours.

Pigs are sensitive, intelligent animals, legally recognised as sentient which means they can experience pleasure and pain, sorrow and happiness just like we can. However, 99% of pigs in Ireland are subjected to a life of misery in barren, slatted, overcrowded pens where they have no stimulation and cannot carry out any natural behaviours. Piglets are routinely mutilated at just a few days old by having their tails docked and teeth clipped which is in breach of the Pig Directive.

Sows spend around five months of the year, nearly half their lives, in a cage too narrow to turn around in, unable to tend to or escape from their piglets. Pigs would naturally have their toilet area away from where they eat and sleep but when trapped in a cage or overcrowded pen that is not possible.

Pigs are hardwired to root and forage and this innate behaviour is denied them causing stress and frusration. Overcrowded pens lead to competition for space and food and aggression follows, hence the docking of tails. If pigs were provided with a proper environment that suits their species the problems with fighting and piglet crushing would be greatly reduced.

Pig Aware Ireland is a new campaign set up by Ethical Farming Ireland and My Lovely Pig Rescue to raise awareness of the suffering of almost all pigs in Ireland and push the Minister into actually enforcing legislation and enacting the Animal Welfare Strategy.

We would like to deliver the petition in person if the Minister will agree to meet with us.